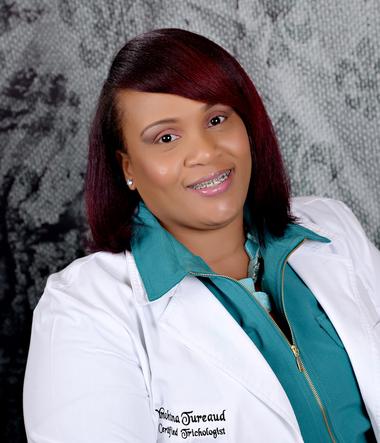 Ynohtna Tureaud is one of the leading hair care specialists, as well as one of the first Certified Trichologists, in the state of Louisiana. She has been in the hair care industry for over 20 years. Throughout the years, she has become a licensed Cosmetologist, Barber, and Instructor. The last nine years have catapulted Ynohtna into the ever-evolving science of Trichology, where she specializes in addressing all forms of hair loss and scalp disorders.

Ynohtna's childhood desire to become an icon in the hair industry, has inspired her to become a healthy hair and scalp advocate. During the early years of her career, Ynohtna realized she wanted to stand out from other stylists and she did so by creating unique and exquisite hairstyles. Her incredible work opened doors to a plethora of opportunities, working with well known business owners such as Dudley Hair Care. As she continued her endeavors, Ynohtna noticed a substantial number of clients who were experiencing hair loss. This sparked a burning desire to become educated, and ultimately certified in the science of Trichology. As Ynohtna focused on learning the medical aspect associated with hair loss, she excelled in her studies to the magnitude of being named Salutatorian from the National Trichology Training Institute in Stockbridge, Georgia. She also became certified through the American Medical Certification Association, as well as an affiliate of the American Hair Loss Council.

Ynohtna has received numerous certifications, including Medical Wig Installer, Evolve Volumizer and Laser Phototherapy. She has also obtained awards, such as a Proclamation and the Key to Ascension Parish. Her work and expertise articles have been published in books, including " Hairs How Style and Guide", as well as "Sophisticate's Hairstyles and Care Guide" and "City Social" magazines, both nationally and internationally. She has also appeared in the media via television shows such as, Vision of Grace Network, Eatel Community Connection,WAFB Channel 9, and Fox 29 Lake Charles.

With over 80 million Americans experiencing hair loss, Ynohtna has traveled abroad to study and perfect her craft and continues to promote Alopecia Awareness by conducting seminars and classes. She works alongside other paramedical healthcare professionals to help decrease the number of people affected by Alopecia. She also serves as a volunteer with the American Cancer Society's "Look Good Feel Better Program", where she strives to help promote a positive self image to women who are undergoing cancer treatment. Ynohtna  is also known for her community service, as the founder and host of the Annual Back to School in Style Event. She, along with other stylists and barbers, partner together to provide opportunities for kids to receive free hair services, along with mentoring sessions.

Ynohtna's passion to help individuals overcome the stigmas associated with hair loss, has caused her to delve and excel in the field of Trichology. Her extensive training, along with her skills, have equipped her to provide hope to those who assumed their fate was to simply accept their hair loss. Ynohtna's goal is to revive individuals' healthy hair and provide them with the tools to maintain it.